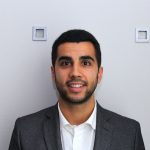 Francisco Veiga Simão was born in January 1993, in the beautiful and sunny city of Coimbra, Portugal. He is a geologist graduated with an MSc in Geosciences with a specialisation in Geological Resources, and a BSc in Geology from the Department of Earth Sciences, Faculty of Sciences and Technology at the University of Coimbra (Portugal). During his academic career, he also participated in the Erasmus+ Programme, which entailed one year studying abroad in the Department of Geology, Faculty of Geology at the University of Oviedo (Spain), where he completed his BSc degree and started his MSc in Geosciences. He also completed a Master’s course in “Rift Basin Reservoirs: From Outcrop to Model” in the Arctic Geology Department at The University Centre in Svalbard (Norway). More recently he completed the world’s largest climate innovation summer school organised by EIT Climate-KIC called “The Journey”, hosted by the Faculty of Geosciences at the Utrecht University (The Netherlands) and by The European Youth Centre in Budapest (Hungary).

Francisco’s main research areas are geochemistry, mineralogy, mining waste, electronic waste, critical raw materials for the EU, circular economy and sustainability. His research on these domains was extensively reported in his MSc dissertation, where he performed a mineralogical and chemical characterisation of the fine tailings dams from the Panasqueira W-Sn-(Cu) mine (Portugal), which was part of a transnational project called “BIOCriticalMetals” (ERAMIN2/2015), where he used several laboratory techniques for sample characterisation. Based on his dissertation results and further research, Francisco’s findings have been presented at the “X National Congress of Geology – Azores, Portugal” and published in a Portuguese scientific journal (Vulcânica). Francisco worked as an intern geologist in a Portuguese technology start-up company (Primelayer), where he did consulting jobs on e-waste management. Apart from that, he has also helped to found and raise a Portuguese start-up company (Geonatour), which does geological consulting jobs and it also promotes geodiversity through a mobile application. On top of that, Francisco has recently being involved on an entrepreneurial project (WEEE-DO) aiming to maximise the efficiency of the collection of electronic waste from households.

Currently, Francisco is a PhD candidate at KU Leuven (Belgium), working at Wienerberger, in Kortrijk (Belgium), on the sustainable use of (cleaned) sulfidic tailing residues in ceramics, as an Early Stage Researcher (ESR12) from ETN SULTAN project, co-supervised by Mrs. Hilde Chambart (Wienerberger) and Prof. Dr. Valérie Cappuyns (KU Leuven). The main goal of his project is to investigate the possibilities to replace primary raw materials for ceramics by tailings, taking into account production parameters, as well as the product quality and environmental issues. On his spare time Francisco enjoys playing football, watching documentaries, socialising and being involved in entrepreneurial projects which can make a change and design a better world.

Keeping Up with the Circular Loop

Circular economy: adopting a four R’s policy (reduce, reuse, recycle and recover) and “keep products, components and materials at their highest utility and value at all times”.